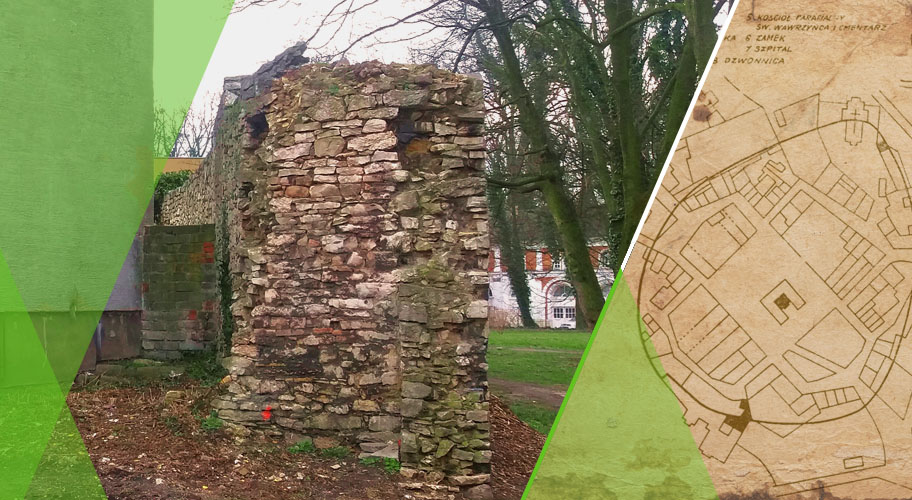 An old trade route Wrocław - Opole - Kraków passed through Strzelce during the Middle Ages. The Opole gate was opened to the west and the Kraków gate to the east. The gates were built over the town moat. There were towers over the gates (10 m behind Corpus Christi Church).

Town Walls were built from the Kraków gate to bell tower (near the parish church) and further along the present walls surrounding the church, through the farm garden to the Opole gate; from the Corpus Christi Churchyard to the castle.

The Strzelce castle served as town defence from the south, with large marshes behind it. The town was surrounded by lakes and marshes from the south and west, therefore deep moat was not necessary. It was however an important defence element from the north and east as there were no natural obstacles.

During the town development, the basic route of merchant road (Wrocław - Kraków) was not altered. The northern part of town - from the Kraków to the Opole gate was still surrounded by walls during the 17th - 18th centuries. The walls were, in turn, surrounded by a wide belt of marshes, from the Opole to the Kraków gate. The moat connected to a ditch leading to the castle, near the Opole gate, thus creating the so called Adamowice flow, going to a pond in Nowa Wieś.

Town walls were opened in the years 1816-25, due to development of the road Wrocław - Opole - Strzelce - Bytom. Only fragments of medieval walls survived - opposite the Corpus Christi Church at Opolska str. and from the north - along Kościuszki str., surrounding St. Lawrence Church.