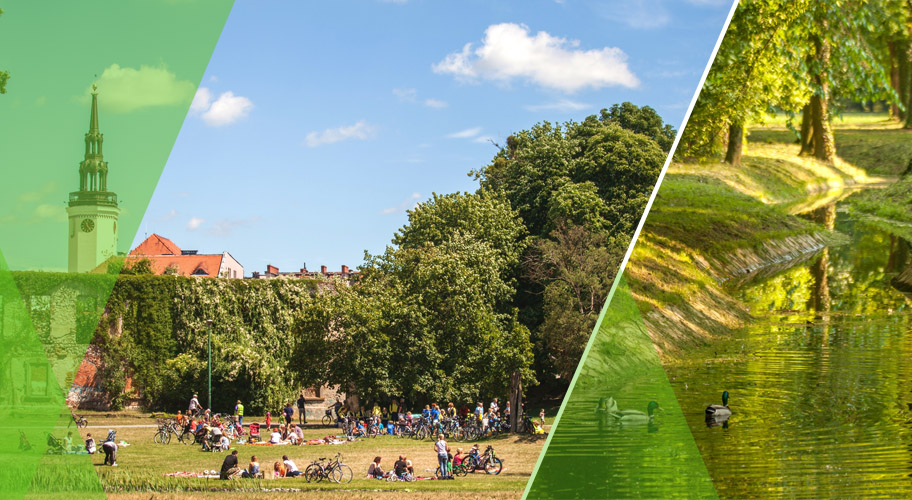 The Strzelce park history dates back to the beginning of the 19th century, during the rule of count Andrzej Maria Renard. The count sent his gardener - Schmidt to London so that he could make plans and study garden architecture there.

Establishing of the park started in 1832. First, the so called "small park" was established to the south from the castle ruins. It is separated from a much younger, "large park" by Park street.

There is a hill (the so called chestnut hill) next to the castle, created during building of the ponds. The earth was dug and created the hill. Hundreds of workers transported soil during that process. The so called temple hill (now a "three benches" hill) is also artificial. Some decades ago this was a flat area.

Trees were uprooted from neighbouring woods (owned by the count). Some beautiful examples of plants were even transported from the Lubliniec area forests. Most of these trees still grow there thanks to excellent soil and proper care. The park area is 62 ha. Establishment of the park, planting trees and making lanes took approximately 25 - 30 years.

There are many unique trees in the park, for example red beech, silver maple, broad-leaved lime, yew tree, pine, oak, maple, hornbeam, white beech, white poplar. In the large park, there are chestnut, white beech, willows, American silver fir and others. Wild birds find shelter on an isle in the pond. Further, there is a hunter's house (the so called "forest house"). There was a Greek-style building on the "temple hill" years ago. From there, one can see meadows and groups of trees.

The central path, dividing that part of the park into half, has many coniferous trees. Many cuttings have been realised since 1887 in order to make room for new plants. The scale of works was enormous, as from 8 to 10 thousand new bushes and conifers were planted each year. Thus, the park acquired new types of plants and its paths and lanes were renovated.

The Strzelce park still remains a unique botanical, historical and tourist attraction. It is a beautiful pearl of the town and region of Strzelce Opolskie.