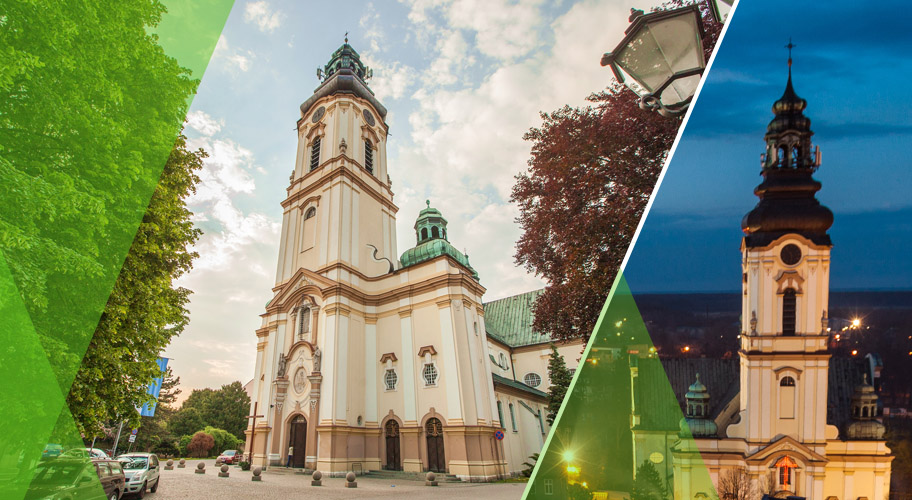 The Catholic church of St. Lawrence was built before 1290 when the first Strzelce parish priest - Mikołaj, also a notary to Prince Bolesław I of Opole, was mentioned. The church and priest were administered by arch presbytery in Opole. The church was localised within town walls. The altars were founded in the first half of the 15th century and an appropriate caretaker was appointed. There were also a parish priest and a vicar residing.

The parish owned some land but parish priest did not employ any steward. The church acquired a new, main altar in 1697. Sculptures were made by a carpenter Walek from Tworóg. When Ernest Joachim von Strachwitz became parish priest, the church was renovated (1731 - 32) and in 1736 new organs were purchased and presbytery developed. During the fire in November 1754 the church was also partly damaged but it was restored totally by Franciszek Jerzy von Strachwitz.

Sermons were preached in Polish in the 17th and 18th centuries. Only after the order of Fryderyk II, the parish priest Adam Józef von Larisch had one mass preached in German, during church celebrations (March 9, 1764). Due to Larisch, a mass in German was introduced also on ordinary Sundays. Larisch had a lot of merits to the Strzelce church and its income by establishing in 1763 a foundations register. It took 7 years of hard work, collecting old documents and testimonials of parishioners. The final register contained data on assets and dues to the Strzelce church.

Burials of eminent citizens (noblemen, clergy, authorities) in the church tombs were stopped in the end of the 18th century. Jan von Larisch renovated the roof of the church of St. Lawrence in 1824.

There lived 6.000 Catholics in Strzelce in the middle of the 19th century. The May masses were introduced by Augustyn Bertzik on June 1856. There were 2 chaplains apart from the parish priest in the parish in 1863.

The most merits for the Strzelce parish were due to Maksymilian Ganczarski - parish priest. Building of a new parish church was the main task for the catholic community in the beginning of the 20th century. Building of the new church was managed by Jerzy Gűldenpfennig, under supervision of regional building inspector, Weihe. Engineering and construction works were performed by a builder Śliwka from Zabrze.

The old St. Lawrence Church was a small, baroque building with 3 oblong naves. Construction works for the new church started on April 19, 1904. The new building construction was ready in the autumn of 1905. On September 14 this year, the top of tower and cross were installed and on September 25, M. Ganczarski consecrated the cross.

In the top of the tower, a copper can was placed, with a document about building of the church and presbytery. Huge celebrations for the Strzelce parishioners took place on June 3, 1907 when cardinal J. Kopp consecrated the new church.

The church is in neo-baroque style. The main altar is in baroque style and was made in 1712 by Jan Kőnig from Wrocław. The altar contains statues of the saints: George, Florian, Archangel Michael and 2 unknown women. In the centre there is a picture of Our Lady of Snow with the Child in an ornamented frame.

There are also baroque side altars. There are statues of St. Lawrence and an unknown saint and Christ the Saviour on top, in the left side altar.

There are statues of 2 angels and a blessing Christ in the right side altar with 4 columns. There is also a painting on a board of St. Anthony with a child (17th century) and in the left side altar - a painting of Archangel Michael (18th century).

A late-baroque pulpit was made in the first half of the 18th century. It is situated next to the left side altar. It was renovated and partly rebuilt when the new church was ready, in 1907. The canopy is in the shape of a lantern, with a sculpture of Our Lady of Assumption with four Evangelists.

The German army confiscated 4 bells during WW I in 1915. They were broken in the towers. The same happened to organ-pipes made of metal. On December 3, 1922 new bells were installed, made by Geitner company from Wrocław. On December 6 and 7 of the same year, parish priest Maksymilian Ganczarski consecrated the bells and named them: Jan, Maria and Barbara.

After WW II, when Faustyn Zbaniuszek was the parish priest, in October 1946, during the pilgrimage of parishioners to Częstochowa, a painting of Black Madonna was purchased and placed in the side altar, next to the pulpit.

The new St. Laurence Church is made of bricks and covered with plaster. It is 58 m long, middle nave is 12,8 m wide and 14 m high. Barrel vault is connected into an interesting dome. The tower is 62 m high with a baroque top. There are side-steps to organ-loft. There are 2 -floor extensions. Above the main portico, there is a stucco relic of the good shepherd and statues of Apostles on the sides. When looking up, one can see 7 large ceiling paintings with motives chosen by the current parish priest - M.Ganczarski. They present: Annunciation, Christ's Birth, teaching of Jesus in the temple, healing of the sick, Christ as children's friend, Last Supper (in the choir) and Christ's Assumption (in the naves' crossing). The above baroque paintings were made by a painter Klink from Babice, near Głubczyce. In choir windows stained glasses there are silhouettes of St. Jan Nepomucen, St. George. In the windows of the nave, there is a picture of the Immaculate Madonna and St. Clara.

The most precious objects were taken from the old church. The pulpit was renovated by an artist carpenter Janotta and painter, Kurda.

In the narrow upper floor of the main altar there is a newer painting of the church's patron - St. Lawrence. In the side altars of the upper floor there are paintings of God the Father and Guardian Angel painted by a nun - Amabilis Güldenpfennig from Aachen. In the east wind of the nave there is a painting of the Sacred Heart of Jesus and a rosary altar. In the upper floors there are paintings of St. Boromeusz and St. Joseph. Organs were made by the Company Schlag and Sons and stations of the Way of the Cross were sculptured by Paweł Thamm from Lądek.

The above described elements are in harmony with the remaining church ornamentation. The reminiscence of the former St. Barbara chapel from the old church - now the St. Jadwiga chapel - is the St. Jadwiga altar.

The church building is impressive. Its slim tower, together with town hall and castle tower are symbols of the town centre.